As early as 1880 the Aqueduct Commission had started acquiring land for the New Croton Dam and Aqueduct System. Seven thousand acres were needed for the Croton watershed and to harness the Croton River's three branches. A twenty square mile area was needed by the city on which to build the new Croton Dam. Twenty-one dwellings and barns, one and a half dozen stores, churches, schools, grist mills, flour mills, saw mills, four towns, and over four hundred farms were condemned and taken over to build the dam. Fifteen hundred bodies had to be taken out of six cemeteries and relocated along with their stones and fences. Protests, lawsuits and confusion preceded payment of claims.

Finally, contracts were awarded. On August 26th, James S. Coleman won the bid for $4,150,573.00 to be completed in five years. John B. Goldsborough, a self-taught civil engineer was appointed as Superintendent of Excavation for foundations and for hiring men to work at the dam. In 1892, the first labor force hired by JB was made up of Irish laborers and stone masons who had worked on the Old Croton Dam. These men now averaged 70 years and older; they had been 16 and 17 years-old during the construction of the Old Croton Dam.
JB developed a system of obtaining labor forces from Southern Italy for work at the New Croton Dam. These men were professional masons. The Italian workers left their wives and families, their culture and customs. Arriving at Staten Island, they were met by the people who sent for them. The padrone handed them $25 as they got off the boat as they arrived without passage money. The padrone met them a block away and took the money back again. They were taken by train to the New Croton Dam where the contractors had set up a row of shacks on stilts for them to live in. So a new life in a new land had begun. The handiwork of these men can be seen throughout Croton today.

James Coleman organized the Croton Quarry Company after he bought the Millstone Hill Quarry near Hunterbrook, which provided the dark gabbro stone for the inside portions of the walls and excavations. A railroad was built on leased land, 17 miles of track to Peekskill and Quarry Acres. All along the hills of the dam and on the site, a miniature railroad was constructed that carried on it open cars with materials removed from the banks or stone and brick for construction.

After the machinery, plant and quarters for their men had been set up by the contractors, they began the work of excavating for the great dam. Work began September 16, 1892 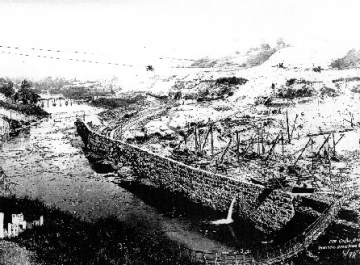 . The riverbed had to be bared and a pit had to be excavated to 130 feet deep. To do this a canal 1000 feet long and 200 feet wide was cut into the rocky hillside across the north end of the dam. This was a crescent - shaped diversion, which had been blasted out of the solid rock of the hillside north of the valley. Its upper and lower ends joined the old riverbed. The river was confined by means of a masonry wall 600 feet along the south bank. This was then continued at each end by the dam extending across the old channel. One of these dams was 30 feet high and 110 feet wide built of rolled earth, with a vertical center wall of heavy timber piles driven 20 feet into the ground.
A similar dam 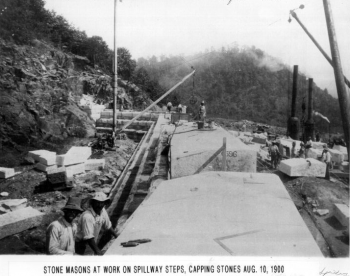 is built across the old riverbed at the lower end of the canal. The space enclosed between them was pumped dry by powerful steam engines. This diversion alone cost many thousands of dollars. To be safe, for eight years during which the great dam would be under construction, the trench was made as strong and as heavy as any permanent structures. Cofferdam and cableways are erected and construction continued. At the downstream side, the masonry was built solid against the rock face and then stepped back to lines in steps 24 inches to 30 inches high, to the level above the back-filling where the cut stone-facing of the dam was begun. In 1896 the central masonry dam was extended 110 feet. Then when cracks appeared in 1901, the masonry dam was extended to the south side of the valley.
Two-ton rocks were hauled down by cables and placed on the main dam. Derricks on the main wall passed rock and mortar to the locations, 36 masons laid an average of 3240 cu. yards of masonry a month. Work continued day and night, summer and winter, except when it was 20 degrees below zero. In winter, the rocks were steamed and salt was added to the mortar to prevent freezing.

Wages were low and hours were long. The laborers declared that they would no longer submit to such imposition. April Fools' Day, 1900, the quarrymen showed up for work and then put down their hammers. The die was cast. Soon teamsters, drillers, machinists and other artisans followed suit. A full-scale strike was on at the dam, strikers declared that they had been kept at starvation wages of $1.25 and $1.30 for a 10-hour day.
Major General Charles Roe's 7th Regiment National Guard proceeded to the dam, April 17, 1900, and Camp Roosevelt was set-up, with 1500 men and supplies. Headlines read: Unions want answers: The Coleman version of the padrone system: Coroner describes labor camps at the New Croton Dam. By August 1902, the New York City Mayor, Seth Low, made the 8-hour day mandatory.

It was not only wages and hours that beset the Aqueduct Commission. On May 15, 1901, William Hill the Chief Engineer at the Croton Dam was told by one of his masonry inspectors that the work was defective. The dam had holes in it through which streams of water gushed. The core wall would have to be torn down and rebuilt. Those recommending the changes believed that nothing should be spared, including expense, because the dam was essential to New York City's water supply.

The last stone was laid on the dam, January 1906. The New Croton Dam took 14 years to build and is 301 feet high. The dam was hailed as the second largest hand-hewn masonry. 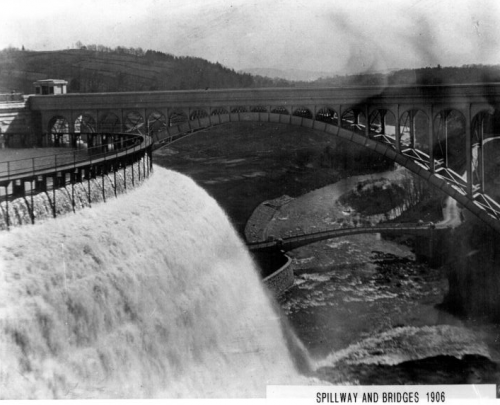